Breaking out of the Shellcode: Jeff Moss on Mr. Robot and hacking movies 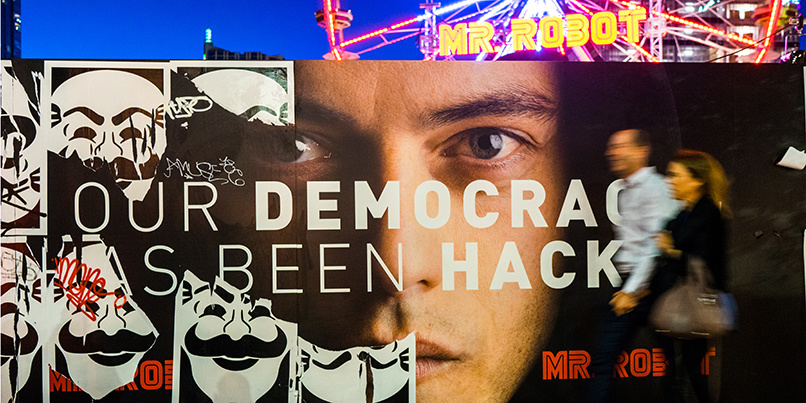 Jeff Moss is perhaps best known as the founder of the DEF CON and Black Hat security events.

However, he has also been a technical consultant to Mr. Robot – a television show that gets kudos for its accurate portrayal of hacking and security exploits.

In the run up to our publication of The Top 10 Hacking Movies of All Time, The Daily Swig caught up with Moss to discuss his time as a consultant for Mr. Robot and hear about his own favorite hacking movies.

What influence did you hope Mr. Robot might have on other shows?

Jeff Moss: What I was hoping was that it [the entertainment industry] would start to portray hackers as more complex and complete humans.

At first, we were so excited when there were hacker characters in movies and TV. Now every TV show has a ‘hacker’ character but they're like the McGuffin – they’re the thing that moves the plot line forward.

We need to find the car in LA. ‘Oh, I’ll look at the kaleidoscope satellite image… Oh, there it is down by the beach’. All the hacker did was move the plot point a little bit forward, whereas in Mr. Robot the hacker is central to the whole entire plot. That was a change. It was no longer a side show – it was in the spotlight.

I thought with the success [of the TV show] you would start to see [hacker] characters that could be more complex. I think that's another lasting victory of the show [Mr. Robot].

That authenticity, [having] a more complex character doesn’t detract from the story. And with a little bit of extra detail, you’ve got this passionate following.

Jeff Moss: The movie Hackers turned into something like the Rocky Horror Picture Show for hackers

What other hacking-related films do you like? There aren’t that many, maybe 30 or 40.

JM: [I like] old school films. You have to watch Colossus: The Forbin Project – it’s the first computer that takes over the world to save mankind film. It’s [based on] one book in a three-book story and they only made a film about the first book.

[And see] Robert Redford in Three Days of the Condor, another film based on book. I love the paranoia that’s in there and his little phone hacking stunt.

Then there’s Enemy of the State, which is kind of a little bit over the top. The paranoid character is [actor] Gene Hackman’s homage to his character in The Conversation.

I always liked these early movies because the pacing is slower and there’s less demand for the showy explosion – so they have to be more cerebral. I think, later on, it all had to get faster and faster and more exciting.

Then you have to watch WarGames, a movie that got me really interested in computers, and then Sneakers, of course. I heard a rumour they were trying to do a TV series of Sneakers. Apparently, there are scripts written and people involved but I haven't seen anything.

Do ever start watching a film or TV program about hacking and it does something so implausible that it turns you off of watching?

JM: Yes, so many times. Especially if they are trying to use the technology as a plot element and they don’t put the energy into it. If you’re not respecting that part of the show, then what other parts are you not respecting?

I had a friend who was a tech advisor on the movie. He got so frustrated. He quit after they taped the two phones together [for a scene].

He’s like, “it doesn’t work that way” and they said, “Yes, but it’s such a good visual representation of what’s going on” and he’s like, “OK, I quit”.

Had he stuck around and had his name in the credits he would have been immortal forever, and in a good way, because the film has turned into such a thing.

The fourth and final season of Mr. Robot comes to a conclusion this month.

RELATED The Top 10 Hacking Movies of All Time