In an entertaining two-minute video, posted on Twitter, the antivirus pioneer channeled the passion of prematch WWE wrestlers in dismissing encryption as useless.

McAfee argued that the privacy promised by encrypted email and instant messaging systems like ProtonMail and Signal are illusory because governments are easily able to hack smartphone and other endpoint devices.

The tirade was ostensibly posted by McAfee in response to criticism of his use of Gmail as an email system – an approach he defended in robust terms. 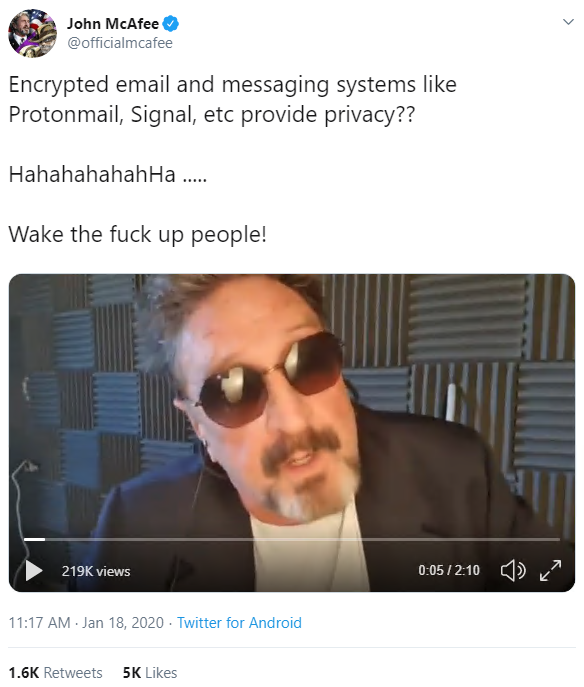 He continued: “Your fucking smartphone is the surveillance device preferred by every government on the fucking planet.”

“[After] the first click [then] you now have malware that is doing two things: watching your inputs before they are encrypted, and transmitting them, and reading the outputs after they are decrypted.”

He concluded: “Encryption is a worthless piece of shit old technology.”

McAfee went on to state that he used Gmail because Google is the “last company” that requires a subpoena from a government before handing over user information.

Google’s lawyers allow themselves 30 days to review such requests and this is why, according to McAfee, that he changes his email every 15 days.

The Daily Swig invited ProtonMail to response to McAfee’s diatribe – an invitation it readily accepted.

A spokesperson for ProtonMail said: “John McAfee is making a nonsensical argument. Any service that encrypts data is by definition more secure than one that doesn’t.

“It’s true that if a device is compromised, the unencrypted data stored on it is at risk. But it’s perfectly possible for devices to be secured and for the data stored on them to be encrypted in the same way as the data on our servers has been encrypted.”

That probably brings the short but enjoyable spat to a close. McAfee himself has certainly moved on already.

After fending off various critiques of his argument against cryptography – such as why he’s so down on encryption but positive about cryptocurrencies – McAfee has been busy applying his rhetorical skills to promote his putative candidacy for US President.

The 74-year-old unsuccessfully attempted to get selected as the Libertarian Party candidate during the 2016 election cycle, so his 2020 run is not his first time at the rodeo.