Burp has previously checked for XXE injection by modifying client-submitted XML data to define an external entity that references a known file, for example:

and then using the defined entity within a data field of the document. If the application responds with the contents of the specified file, then this indicates that the application processed the injected external entity, and Burp reports the issue.

Burp's new capability lets it report blind XXE injection in these situations. Burp now attempts to define an external entity that references a URL on an external domain, for example:

When the vulnerable application processes this external entity, it fetches the contents of the specified URL, and so interacts with the Burp Collaborator server (typically a DNS lookup followed by an HTTP request). After sending the blind injection payload, Burp Suite polls the Collaborator server to determine that the interaction occurred, and so reports the issue.

Full details of the vulnerability are reported to the user, including both blind and non-blind behaviors, and all interactions with the Collaborator server: 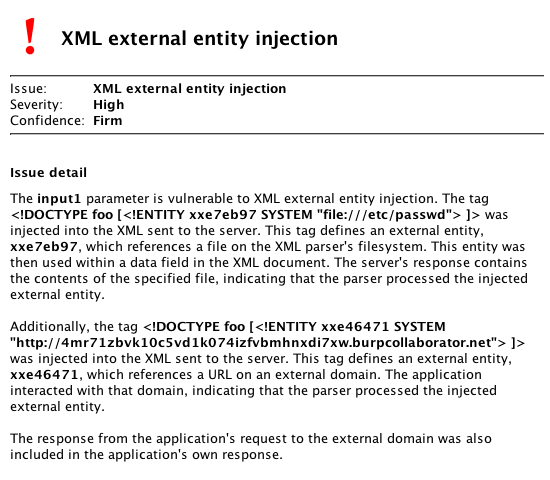 Due to the lack of widespread testing for blind XXE injection vulnerabilities in the past, it appears that these vulnerabilities are relatively common in application functions where client-submitted XML is processed on the server side. Burp's new capability in detecting blind XXE injection is an excellent example of what it is possible to build on the core Burp Collaborator platform. Over the coming months, we will be adding a lot of new capabilities to Burp, based on this platform. Users are encouraged to make use of the Collaborator feature, either via the public Collaborator server or a private deployment.