This is a preview of a new addition to the Burp family of tools, which will be included in the next release of Burp Suite arriving later this year.

Burp Sequencer is a tool for evaluating the randomness of session tokens or other data. Think Stompy on steroids, with more tests, quantitative results, graphical reporting, and arbitrary sample sizes.

Burp Sequencer is easy to use. The first step is usually to locate a request within the target application which returns a session token somewhere in the response. You can do this using the "send to sequencer" option within any of the other Burp tools: 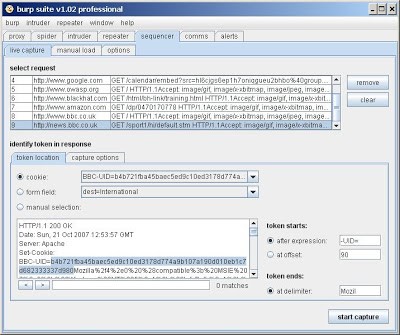 As soon as 100 tokens have been captured, you can perform an analysis of the tokens, to get an initial rough indication of the quality of their randomness. Obviously, a larger sample size enables a more reliable analysis. The live capture continues until 20,000 tokens have been captured, which is sufficient to perform FIPS-compliant statistical tests.

If you have previously obtained a sample of tokens from the application (or from any other source) you can also load these manually into Burp Sequencer, to perform the same analysis on them: 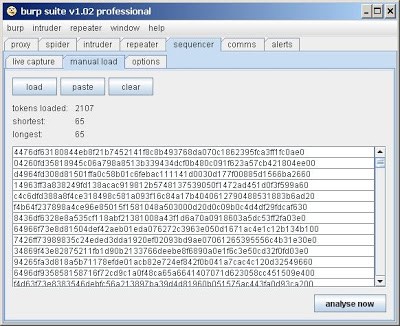 Burp Sequencer can operate on any sample size between 100 and 20,000. The analysis mainly uses significance-based statistical tests in which the assumption that the tokens are random is tested by computing the probability of the observed results arising if this assumption is true. If the probability falls below a particular level (the "significance level") then the assumption is rejected and the anomalous data is judged to be non-random.

This approach allows Burp Sequencer to give an intuitive overall verdict regarding the quality of randomness of the sample. This summary shows the number of bits of effective entropy within the token for each level of significance: 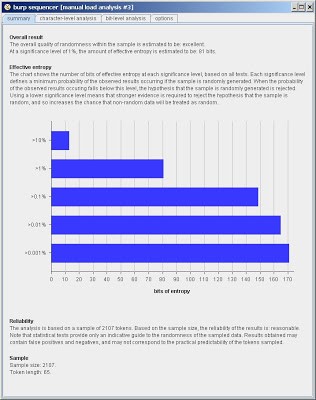 To gain a deeper understanding of the properties of the sample, to identify the causes of any anomalies, and to assess the possibilities for token prediction, Burp Sequencer lets you drill down into the detail of each character- and bit-level test performed. The following screenshot shows the analysis of character distribution at each position within the token: 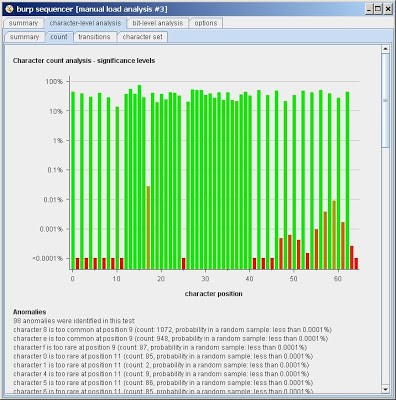 The following screenshot shows the results of the FIPS monobit test at each bit position within the token: 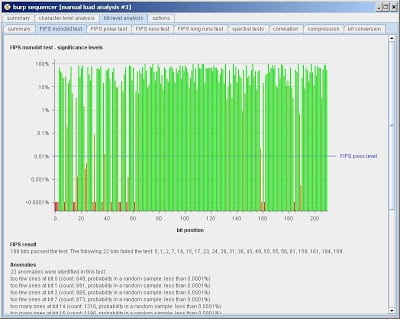 There are several other useful functions and configuration options affecting how tokens are captured and processed. Hopefully, Burp Sequencer will prove to be a valuable weapon in the web application hacker's arsenal, and will enable more effective and easier assessment of session token randomness than is possible with other current tools.