I've been taking a look at the ASP.NET ViewState recently, and have done a (rather unscientific) survey of the way it is currently used on Internet-facing web applications. Here are a few statistics, based on a sample of more than 10,000 applications:

The largest ViewState I discovered was a whopping 3.8Mb in size, which appeared in a government web application displaying tables of statistics. Given that the ViewState is posted back to the server with each request, this application is seriously sluggish to use, even with a relatively fast connection.

I was surprised at the number of applications not using the EnableViewStateMac option, given that this is now set by default in ASP.NET. Without this option, the contents of the ViewState can be modified by the user, potentially affecting the application's processing in nefarious ways.

Even with EnableViewStateMac set, users can still decode and read the contents of the ViewState if it has not been encrypted. Application developers may use the ViewState to store arbitrary data, beyond the default serialisation of UI controls. I wonder how many attackers bother to decode and inspect the ViewState to check whether it contains anything of interest. The next version of Burp Suite will include a utility to deserialise and render the ViewState contents, to make this task trivial. A sneak preview is shown below: 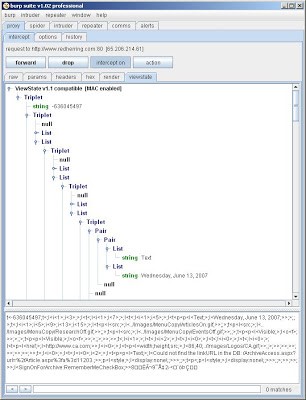 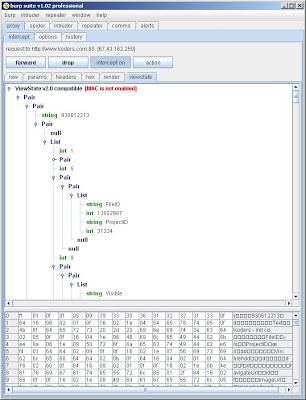