Static analysis of JavaScript involves parsing the code to construct an abstract syntax tree, identifying the tainted sources and dangerous sinks, and locating possible data flows through the code to identify paths via which malicious data could be propagated from a source to a sink.

Burp's new Scanner is getting a fantastic new capability. It will perform dynamic analysis of JavaScript to reliably discover DOM-based vulnerabilities.

Static and dynamic approaches to security testing have different inherent strengths and weaknesses:

Burp's new dynamic analysis of JavaScript uses an embedded headless browser. It loads HTTP responses into the browser, injects payloads into the DOM at locations that are potentially controllable by an attacker, and executes the JavaScript within the response. It also interacts with the page by creating mouse events to achieve as much code coverage as possible. It monitors dangerous sinks that could be used to perform an attack, to identify any injected payloads that reach those sinks.

The new JavaScript analysis has been in development for many months, during which time we have tested it against numerous bug bounty sites, and found a ton of exploitable vulnerabilities that couldn't be found by any existing tools. So we know just how well it works: 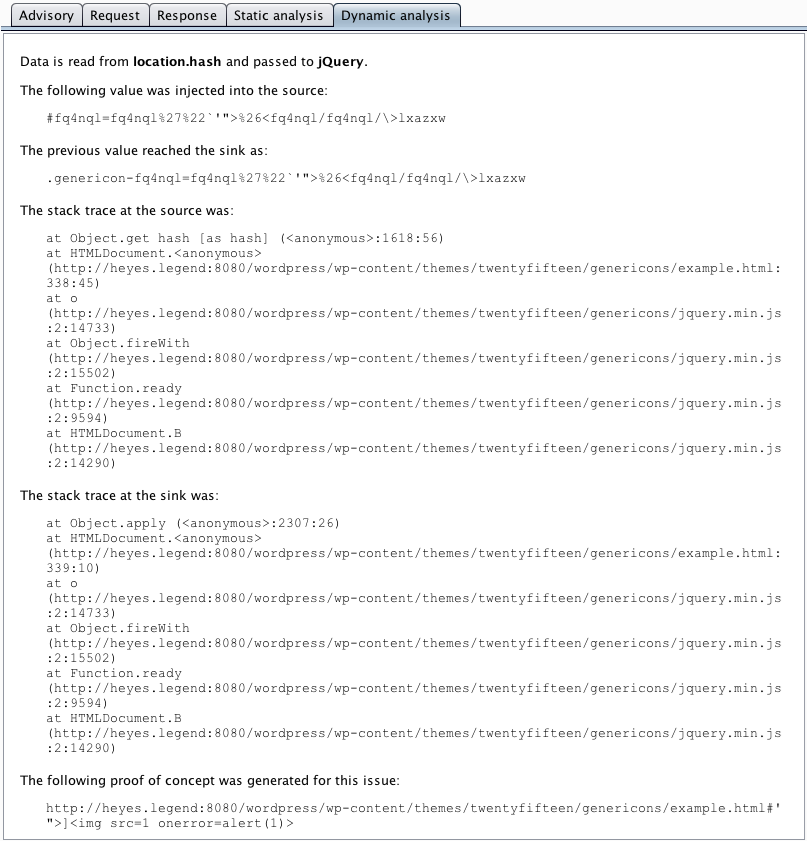 But it gets even better. The new Scanner still performs its old-style static analysis, and harnesses the joint benefits of both approaches. It correlates the results of the two techniques, and where available presents both types of evidence together. These issues may be regarded as rock-solid findings, and are reported as certain. In cases where only static analysis can detect a potential issue, Burp downgrades the confidence with which the issue is reported. This integrated approach to JavaScript analysis greatly assists a tester who is reviewing results to find the most important issues.