This release adds the ability to detect blind XSS, via Burp Collaborator.

Blind XSS is a special type of stored XSS in which the data retrieval point is not accessible by the attacker - for example, due to lack of privileges. This makes the vulnerability very difficult to test for using conventional techniques. In many cases, there is no hint whatsoever in the application's visible functionality that a vulnerability exists. Since security testers are in the habit of spraying target applications with alert(1) type payloads, countless admins have been hit by harmless alert boxes, indicating a juicy bug that the tester never finds out about. Due to the inherent difficulty in detecting blind XSS vulnerabilities, these bugs remain relatively prevalent, still waiting to be discovered. This new release of Burp empowers testers to easily find these critical vulnerabilities, with no special configuration or other tools required.

Previously, Burp Scanner has used purely in-band techniques to detect stored XSS. This involves first scanning the data entry point, later scanning the data retrieval point, identifying the connection between the two, and then supplying suitable payloads to the entry point to formulate a proof-of-concept attack. This approach can often be effective, but has some significant limitations:

This payload starts with a multi-context break-out sequence which, in all normal retrieval locations, will convert the HTML context to one where JavaScript can be executed. It then executes some script that triggers a connection to the Burp Collaborator server. This out-of-band interaction enables Burp to confirm when the payload has been successful. For more details on the breakdown of this payload, see our blog post on hunting asynchronous vulnerabilities.

The new approach to finding stored XSS has some significant benefits:

Below is an example of what Burp's advisory looks like for a blind XSS issue that has been discovered via Burp Collaborator. This example uses a simpler payload that works in many situations. Note that Burp nicely identifies the Referer header from the incoming HTTP request to the Collaborator server, which will normally indicate the retrieval point where the payload appeared: 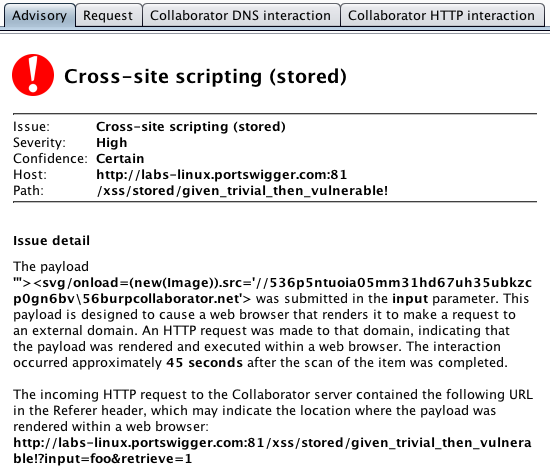