This release improves the logic of some scan checks that depend upon the content type of responses.

Burp has previously reported content type incorrectly stated on any occasion where the stated content type of a response differs from the actual content (as determined by Burp). This has frequently led to a lot of noise because (a) Burp's own content type sniffing has not been perfect; and (b) many content type mismatches have no security implications. Hence, many users got accustomed to just ignoring this issue, despite the fact that, in some rare situations, it can lead to high-severity issues like cross-site scripting.

The cases where this issue matters occur when a response is intended to actually contain non-HTML content such as an image, but a browser may attempt to interpret the response as HTML based on the stated content type. This can lead to XSS if the content is dynamically generated, uploaded by a user, or otherwise contains user input.

In the real world, browsers' actual sniffing of responses depends on several factors, including:

The Burp research team have generated every possible permutation of these factors and identified all of the permutations that might lead to a browser attempting to interpret a response as HTML. This knowledge is now baked into Burp, so that Burp only reports the issue when a suitable combination of the above factors is observed. Further, the Burp advisory identifies precisely which browsers may be affected by an issue: 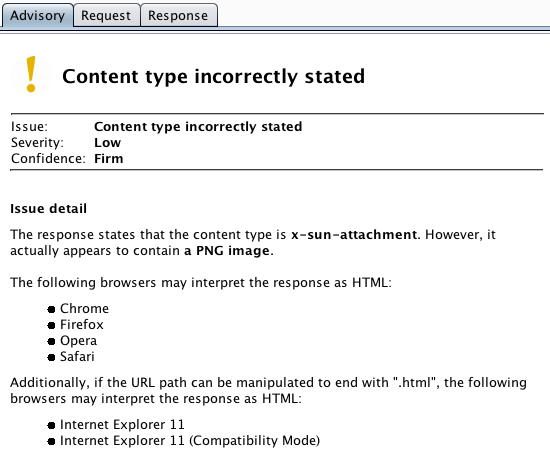 The other type of issue where the situation arises is cross-site scripting. In the past, Burp applied XSS checks to all responses that were either stated or appeared to contain HTML. The scan logic has now been tightened to be more accurate and informative in cases where exploitability of the issue depends upon browser sniffing: 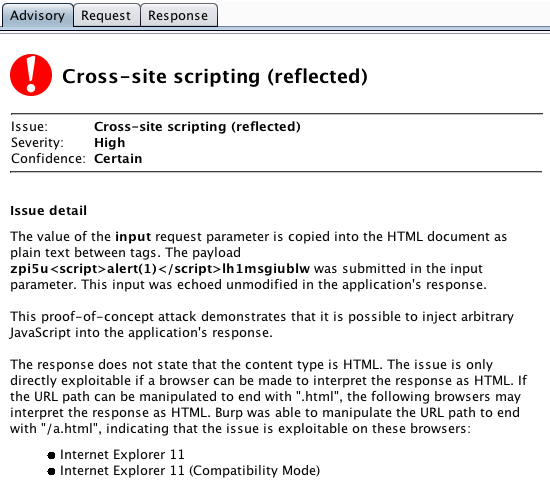