This release adds a number of enhancements to Burp Scanner, including several new JWT-based scan checks and an option to skip unauthenticated crawling when you've provided application logins. The BApp Store now also provides in-app feedback on how much load BApps are placing on your system.

JWT implementations often contain serious vulnerabilities, but these can be tricky to thoroughly audit. Burp Scanner can now detect 8 common JWT-based vulnerabilities - saving you time, and making it easier to secure sites that use JWTs.

On the Extender > BApp store tab, we now display an indication of how much load we estimate that each BApp places on your system. 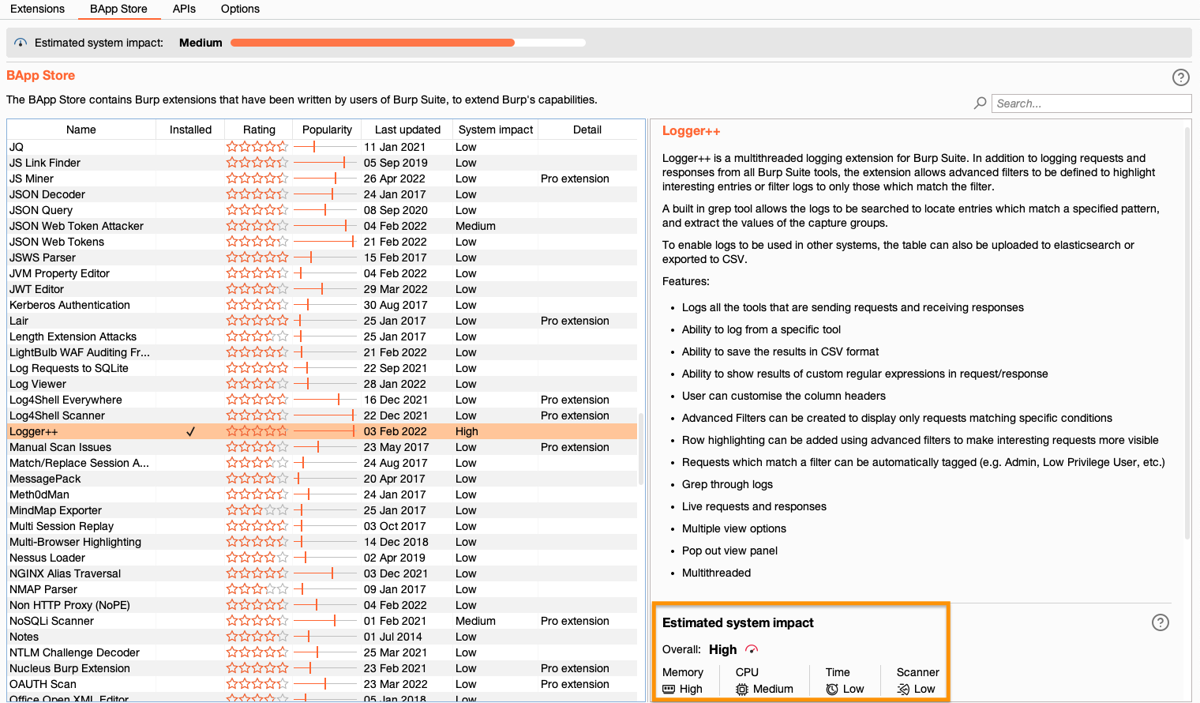 The estimated system impact is divided into the following categories:

If you think that Burp is performing slower than it should be, we recommend checking these estimates for any BApps that you have loaded and removing those that you're not actively using. This should help you to extend Burp's capabilities without impairing performance.

Using multiple extensions at the same time has a cumulative effect on performance. The bar at the top of the screen shows the cumulative impact of all of the BApps that are currently loaded.

You can now choose to skip unauthenticated crawling in cases where you have provided application logins for Burp Scanner to use. This helps to reduce the crawl time.

To enable this option, go to the Crawl Optimization settings in your scan configuration and select Crawl using my provided logins only. Note that if you do not provide any application logins, the crawler automatically reverts to performing an unauthenticated crawl instead.

You can now use Burp Suite's session handling options to add headers and values to requests. When you create a session handling rule using the new Set a specific header value action, the header and value pair you provide are added to any requests that are within the rule's scope.

Burp Suite has always used fully verified TLS to connect to known services, such as portswigger.net and the public Burp Collaborator server. However, when communicating with arbitrary websites, it does not verify upstream TLS certificates and supports weak ciphers by default. This maximizes compatibility at the expense of protection against active man-in-the-middle (MITM) attacks.

If you're concerned about the possibility of an active MITM attack on your communication with the site that you're testing, you can now configure Burp to verify upstream TLS certificates. To do this, go to Project settings > TLS and select the Verify upstream TLS checkbox.

In this scenario, we recommend also selecting the Use default protocols and ciphers of your Java installation option to prevent Burp from using weak ciphers.

Please note that additional hardening is planned for this feature in the future.

We have made several minor tweaks to the appearance and behavior of tabs in Burp Repeater. These will pave the way for some additional features in the future.

Burp Suite now requires Java 11 or later to run. This change should not impact you unless you installed Burp Suite as a .jar file, as the installer includes a bundled private Java Runtime Environment so that you don't need to worry about installing or updating Java. However, any extensions written in a version of Java earlier than 11 may not run correctly from this release onward.