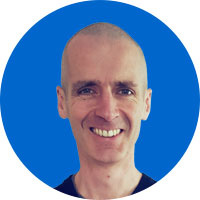 I'm not from a standard "developer" background, I've done all sorts in my career. In the 90s I spent four years at Manchester University doing a Masters in Maths and Physics. Manchester was loads of fun back then and I'm pleased social media didn't exist at the time! That's also how I got into DJing - I spent my weekends for the next eight years playing acid techno and trance in clubs around Northern England and further afield.

In 1998 I stumbled into the nuclear industry as a graduate trainee and that's where I first learnt to code in C++. Then in the early 00s I worked with a couple of web startups, and that's how I got into web development and .NET. I even ran my own business for a while in my late 20s. That didn't go particularly well, so I spent some time as a .NET trainer then got back into development again. Since then I've been a team leader and a middle manager, I've done outsourcing and systems architecture, and have even run my own online personalized Christmas cards business. That was before kids took up all the spare time I never realized I had.

Outside of work my wife and I have visited many different countries in the world. We live by the attitude that if you want to do something, then work out how you're going to do it, and do it! You only live once after all.

More recently I've been a contractor where I rediscovered the reason I got into IT in the first place, to write clean code that solves problems. And in 2019, I found my way into this fantastic business as a permanent employee.

A ZX81 way back in the 1980s. I wrote my first program on it in good old Sinclair BASIC when I was seven.

I was never really sure, which is probably why I've ended up doing loads of different things. But as a kid I had a keen interest in physics, and science is similar to software development in the way that it is used to solve problems.

The people. There are some very very bright and humble people here. Every day the people around me challenge me, yet everyone is easy to get on with.

It's an enlightened business. There's a desire to do things properly. And there's an understanding from the top that when it comes to a deadline an estimate is actually an estimate, not a factimate like in other businesses.