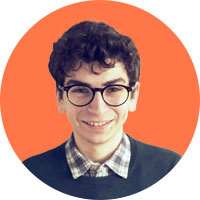 I joined PortSwigger in the summer of 2020, a few months after graduating from a Computer Science degree, so I am quite "baby faced" within the company. Joining mid-pandemic provided its own challenges, as it did to everyone else who moved jobs during lockdown, however people here were extremely friendly all the same.

I'm a firm believer in there being no greater way of finding things out than by giving them a go, and that's what I've always tried to do. A couple of examples include deleting System32 to see if it would make Windows XP run faster (it doesn't work, don't try it), or by creating Swing applications targeting your family to see if it would annoy them (it does work, 100% do try it). So when I wanted to find out how software runs, becoming a Software Engineer felt like the best way to go about it! A few years of uni and a couple of internships later I started my graduate career here. I had experience with Java, Python, JavaScript, Golang and other languages before I joined here, but I had the most experience with Java so I felt well matched with PortSwigger.

Working here combines a load of great benefits into one bundle: interesting work, colleagues who I'm pretty sure are wizards given how clever they are, feeling valued and being able to contribute to software that thousands of people use daily. It really is a fantastic opportunity to be working somewhere with that sort of environment, particularly as a fresh grad.

When did you first hear about PortSwigger, or Burp Suite?

I did a cybersecurity module at university where we used Kali Linux for some of the coursework. I noticed that Burp was preinstalled on the OS so I opened it and had a play around with it, just out of curiosity. I thought it was pretty cool and that it would be interesting to work with it in the future. As it turns out, that worked out quite well!

I originally wanted to be a police officer so that I could arrest my family for the fun of it. I later realized that I'd probably be fired for doing that, so found myself a different career path.

What's the proudest achievement of your life?

Liking Homes Under the Hammer enough that Dion Dublin sent me a video thanking me for watching it. Nothing has managed to top that yet.