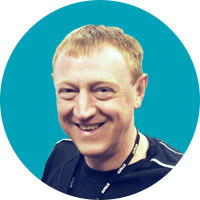 At university, I studied microelectronics and software engineering. I got a job working with C and Unix, which I continued to do whilst working as a contractor. I switched to Java in around 1999. Whilst contracting I worked at companies in a variety of sectors, including ISP, web consultancy, and Formula 1.

In 2013, I was approached by an interesting little four-person company in Knutsford. They had a strange name and a well-respected product called Burp Suite. I took the plunge to join them and it turned out to be a great decision - I've been at PortSwigger ever since.

My first computer was a Sinclair ZX81 with 1KB RAM on which I learned BASIC and Z80 assembler. I then progressed to a BBC Micro, and spent most of my evenings writing simple games.

I was never really sure what I wanted to be when I grew up, but I figured it would probably have something to do with computers. I was always interested in computers, and was lucky enough to grow up at the start of the home computer age. I guess it worked out pretty well for me as I now get paid for doing my childhood hobby!

What is your most used gadget?

I'm never without my phone, especially at the moment, as it's my window to the world!