This technique was first documented by PortSwigger Research in the conference presentation Server-Side Template Injection: RCE for the Modern Web App.

If you're already familiar with the basic concepts behind server-side template injection vulnerabilities and just want to practice exploiting them on some realistic, deliberately vulnerable targets, you can access all of the labs in this topic from the link below.

This technique was first documented by PortSwigger in our 2015 research paper on the subject. If you're interested in how we were able to exploit some of these vulnerabilities on live websites, a full write-up is available on our research page.

What is server-side template injection?

Server-side template injection is when an attacker is able to use native template syntax to inject a malicious payload into a template, which is then executed server-side.

What is the impact of server-side template injection?

At the severe end of the scale, an attacker can potentially achieve remote code execution, taking full control of the back-end server and using it to perform other attacks on internal infrastructure.

Even in cases where full remote code execution is not possible, an attacker can often still use server-side template injection as the basis for numerous other attacks, potentially gaining read access to sensitive data and arbitrary files on the server.

Server-side template injection vulnerabilities arise when user input is concatenated into templates rather than being passed in as data.

Static templates that simply provide placeholders into which dynamic content is rendered are generally not vulnerable to server-side template injection. The classic example is an email that greets each user by their name, such as the following extract from a Twig template:

This is not vulnerable to server-side template injection because the user's first name is merely passed into the template as data.

However, as templates are simply strings, web developers sometimes directly concatenate user input into templates prior to rendering. Let's take a similar example to the one above, but this time, users are able to customize parts of the email before it is sent. For example, they might be able to choose the name that is used:

In this example, instead of a static value being passed into the template, part of the template itself is being dynamically generated using the GET parameter name. As template syntax is evaluated server-side, this potentially allows an attacker to place a server-side template injection payload inside the name parameter as follows:

Vulnerabilities like this are sometimes caused by accident due to poor template design by people unfamiliar with the security implications. Like in the example above, you may see different components, some of which contain user input, concatenated and embedded into a template. In some ways, this is similar to SQL injection vulnerabilities occurring in poorly written prepared statements.

However, sometimes this behavior is actually implemented intentionally. For example, some websites deliberately allow certain privileged users, such as content editors, to edit or submit custom templates by design. This clearly poses a huge security risk if an attacker is able to compromise an account with such privileges. 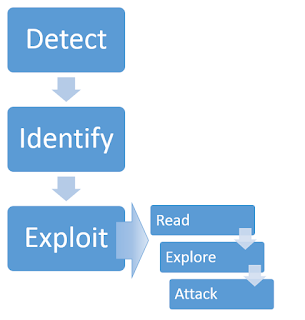 Server-side template injection vulnerabilities often go unnoticed not because they are complex but because they are only really apparent to auditors who are explicitly looking for them. If you are able to detect that a vulnerability is present, it can be surprisingly easy to exploit it. This is especially true in unsandboxed environments.

As with any vulnerability, the first step towards exploitation is being able to find it. Perhaps the simplest initial approach is to try fuzzing the template by injecting a sequence of special characters commonly used in template expressions, such as ${{<%[%'"}}%\. If an exception is raised, this indicates that the injected template syntax is potentially being interpreted by the server in some way. This is one sign that a vulnerability to server-side template injection may exist.

Server-side template injection vulnerabilities occur in two distinct contexts, each of which requires its own detection method. Regardless of the results of your fuzzing attempts, it is important to also try the following context-specific approaches. If fuzzing was inconclusive, a vulnerability may still reveal itself using one of these approaches. Even if fuzzing did suggest a template injection vulnerability, you still need to identify its context in order to exploit it.

Most template languages allow you to freely input content either by using HTML tags directly or by using the template's native syntax, which will be rendered to HTML on the back-end before the HTTP response is sent. For example, in Freemarker, the line render('Hello ' + username) would render to something like Hello Carlos.

This can sometimes be exploited for XSS and is in fact often mistaken for a simple XSS vulnerability. However, by setting mathematical operations as the value of the parameter, we can test whether this is also a potential entry point for a server-side template injection attack.

For example, consider a template that contains the following vulnerable code:

During auditing, we might test for server-side template injection by requesting a URL such as:

If the resulting output contains Hello 49, this shows that the mathematical operation is being evaluated server-side. This is a good proof of concept for a server-side template injection vulnerability.

Note that the specific syntax required to successfully evaluate the mathematical operation will vary depending on which template engine is being used. We'll discuss this in more detail in the Identify step.

In other cases, the vulnerability is exposed by user input being placed within a template expression, as we saw earlier with our email example. This may take the form of a user-controllable variable name being placed inside a parameter, such as:

This would be rendered in the output to Hello Carlos, for example.

This context is easily missed during assessment because it doesn't result in obvious XSS and is almost indistinguishable from a simple hashmap lookup. One method of testing for server-side template injection in this context is to first establish that the parameter doesn't contain a direct XSS vulnerability by injecting arbitrary HTML into the value:

In the absence of XSS, this will usually either result in a blank entry in the output (just Hello with no username), encoded tags, or an error message. The next step is to try and break out of the statement using common templating syntax and attempt to inject arbitrary HTML after it:

If this again results in an error or blank output, you have either used syntax from the wrong templating language or, if no template-style syntax appears to be valid, server-side template injection is not possible. Alternatively, if the output is rendered correctly, along with the arbitrary HTML, this is a key indication that a server-side template injection vulnerability is present:

Although there are a huge number of templating languages, many of them use very similar syntax that is specifically chosen not to clash with HTML characters. As a result, it can be relatively simple to create probing payloads to test which template engine is being used.

Simply submitting invalid syntax is often enough because the resulting error message will tell you exactly what the template engine is, and sometimes even which version. For example, the invalid expression <%=foobar%> triggers the following response from the Ruby-based ERB engine:

Otherwise, you'll need to manually test different language-specific payloads and study how they are interpreted by the template engine. Using a process of elimination based on which syntax appears to be valid or invalid, you can narrow down the options quicker than you might think. A common way of doing this is to inject arbitrary mathematical operations using syntax from different template engines. You can then observe whether they are successfully evaluated. To help with this process, you can use a decision tree similar to the following: 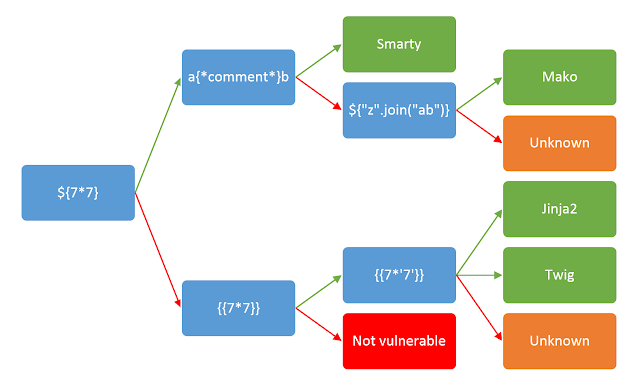 You should be aware that the same payload can sometimes return a successful response in more than one template language. For example, the payload {{7*'7'}} returns 49 in Twig and 7777777 in Jinja2. Therefore, it is important not to jump to conclusions based on a single successful response.

After detecting that a potential vulnerability exists and successfully identifying the template engine, you can begin trying to find ways of exploiting it.

The best way to prevent server-side template injection is to not allow any users to modify or submit new templates. However, this is sometimes unavoidable due to business requirements.

One of the simplest ways to avoid introducing server-side template injection vulnerabilities is to always use a "logic-less" template engine, such as Mustache, unless absolutely necessary. Separating the logic from presentation as much as possible can greatly reduce your exposure to the most dangerous template-based attacks.

Another measure is to only execute users' code in a sandboxed environment where potentially dangerous modules and functions have been removed altogether. Unfortunately, sandboxing untrusted code is inherently difficult and prone to bypasses.

Finally, another complementary approach is to accept that arbitrary code execution is all but inevitable and apply your own sandboxing by deploying your template environment in a locked-down Docker container, for example.