The main Intruder UI lets you configure multiple attacks simultaneously, each in its own tab. When you send requests to Intruder, each one is opened in its own numbered tab. Each attack configuration tab contains several sub-tabs that are used to configure the attack. Use the links below for help on the details of each tab:

The easiest way to create a new Intruder attack is to select the relevant base request within another Burp tool (such as the Proxy history or Target site map), and use the Send to Intruder option on the context menu.

This will create a new attack tab, and automatically populate the Positions tab with the relevant details about the base request. You can then modify the automatic payload positions if required, and configure suitable payloads and other attack options.

You can see that Burp has automatically made a guess at where you would like to position payloads. By default, payloads are placed into the values of all request parameters and cookies. Each pair of payload markers defines a single payload position, and may enclose some text from the base request, which will be replaced with the contents of the payload when that payload position is used. For further details, see the payload positions help. 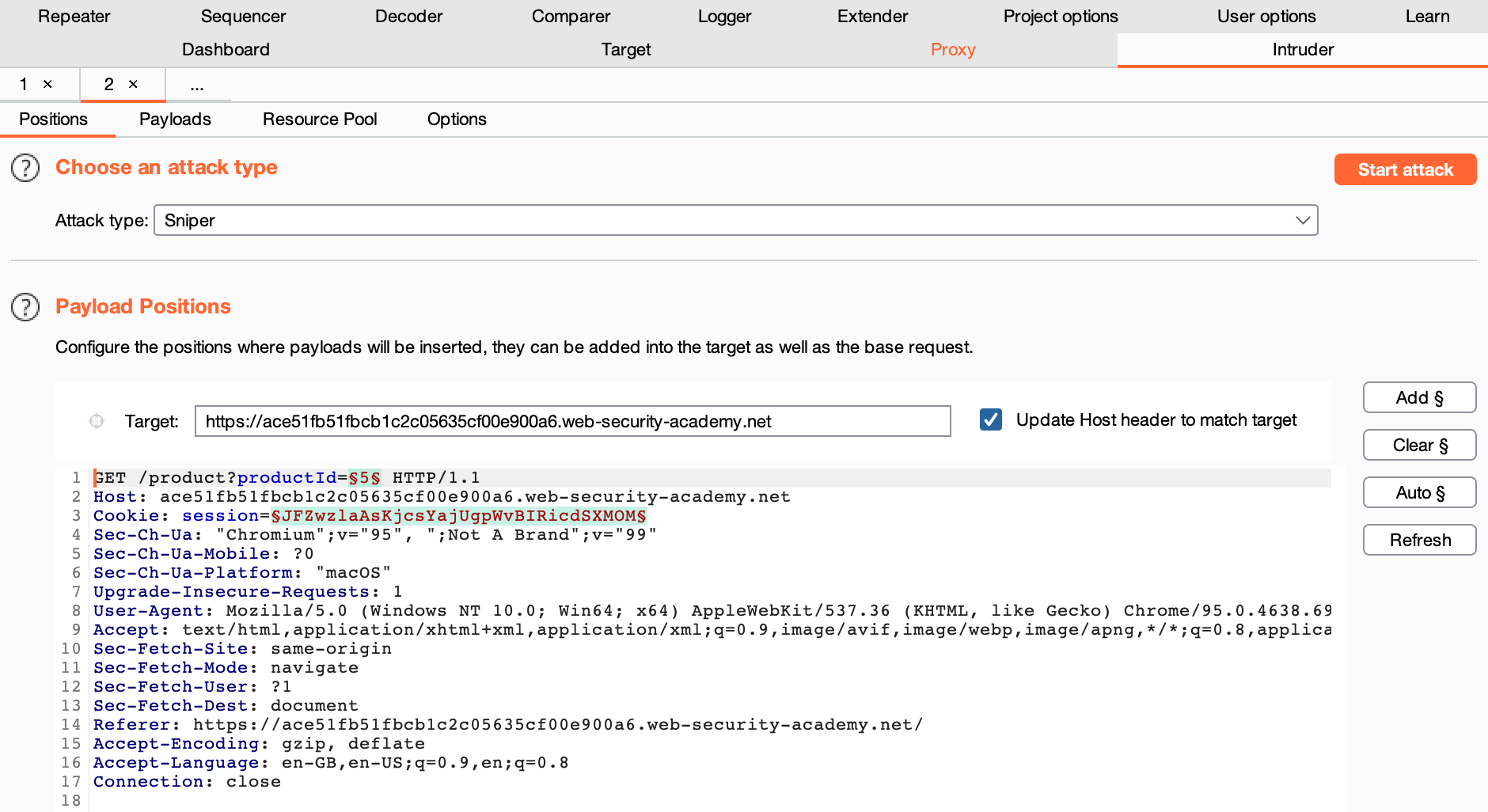 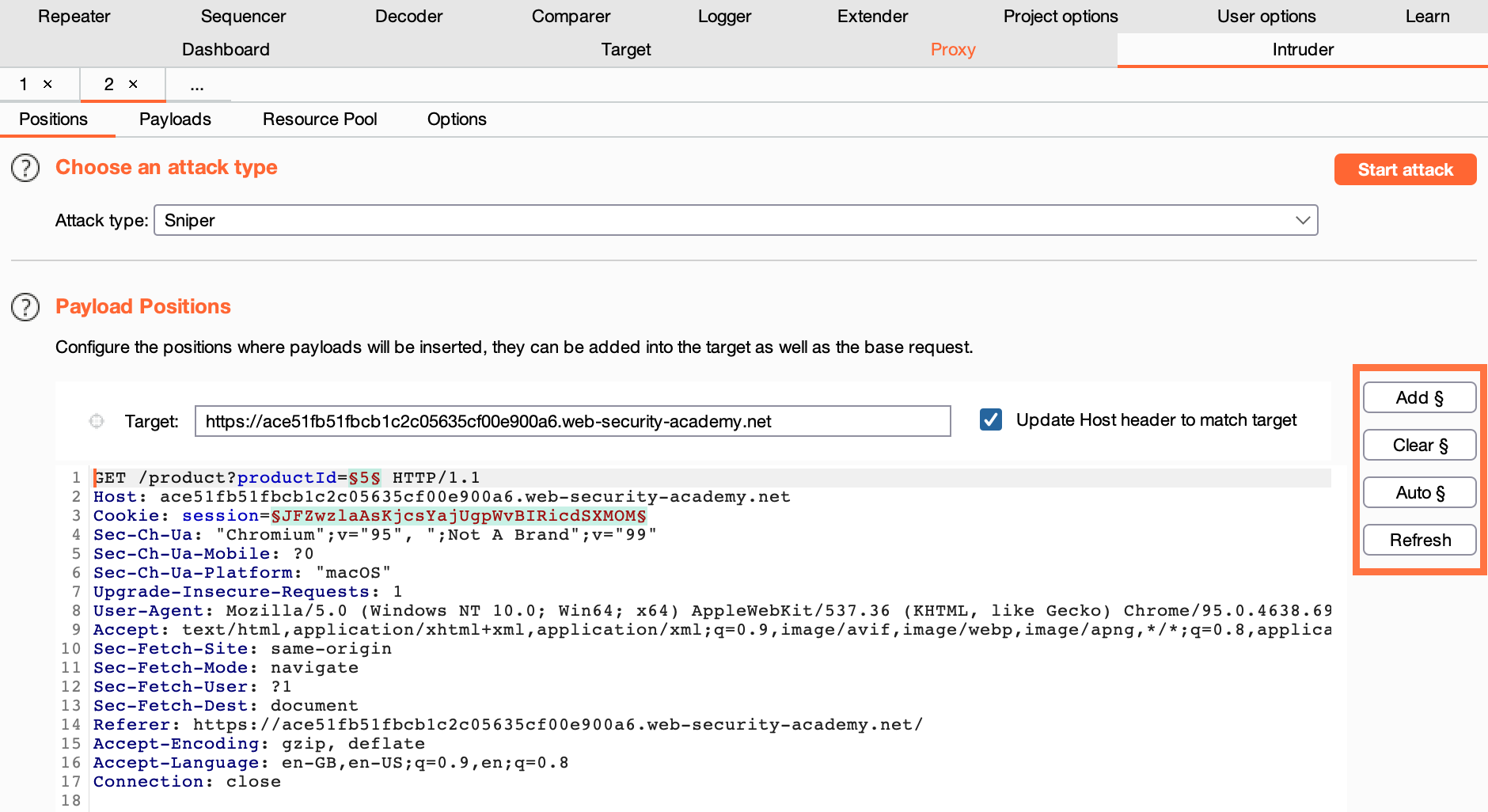 Next, go to the Payloads tab. This lets you define the payloads that will be placed into the defined payload positions. Keep the default setting (to use a Simple list of payloads), and add some test strings to the list. You can enter your own strings by typing into the Enter a new item box and clicking Add.

In Burp Suite Professional, you can use the Add from list drop-down and choose Fuzzing - quick from the list of built-in payload strings. 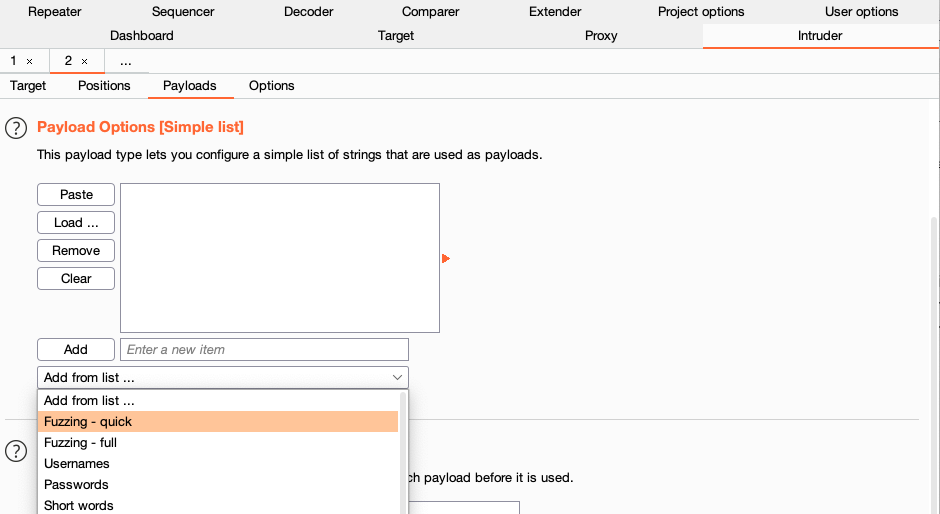 Burp Intruder has a number of functions to help you manage attack configurations. These functions are available via the Intruder menu.

You can save the attack configuration for the current tab, and reload it later. When loading or saving, you can optionally include or exclude the payload positions settings.

You can copy attack configurations between two existing tabs, or into a new tab. Again, you can optionally include or exclude the payload positions settings.

Using the latter options lets you create a generic attack configuration (e.g. for fuzzing), and automatically apply this to each new request that you send to Intruder.

The attack tabs themselves are easy to manage. You can:

When your attack is fully configured, you can launch the attack by selecting Start attack from the Intruder menu, or by clicking the Start attack.

Each attack runs in a new window, containing detailed results, with full requests and responses (if configured). There are various functions to help you analyze the results, and identify interesting items for further investigation.